Founded in 2000, East West Fine Art (formerly Gallery on Fifth) is one of the largest fine art galleries in Florida.

Our gallery represents world renowned, academically trained artists. We carry a selection of oil paintings, mixed media works, photography, and sculpture. Our artists work in a range of styles including realism, impressionism, abstract, cubism, etc. We also carry works in unusual mediums such as handmade paper, wood, and resin glass. 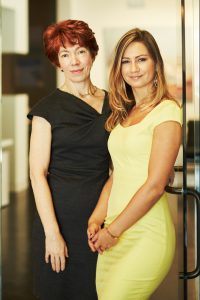 Olga Arkhangelskaya is the founder, and has been the director of East West Fine Art since 2000.

A graduate of Harvard University, she has also completed a Pew Fellowship program at Georgetown University and holds a Certificate in Art History from George Washington University. A founder of Russian-American Cultural Club at the Russian Embassy in Washington DC, she is a tireless advocate for Russian art and culture in the US. She is frequently giving lectures and presentations at her Gallery and as a guest speaker at numerous social clubs and professional organizations.

In 2013 Olga’s daughter, Leeza Arkhangelskaya joined the family business as co-owner of both East West Fine Art galleries. With degrees from University of Geneva and American University, Leeza brought with her over 10 years of international experience in project management and international art fair organization.

Gallery Director Joann C. joined our team in 2015. Having French and Italian heritage Joann’s entire family were involved in the arts. Her ancestors of aristocratic roots were artisans working in cathedrals and churches in Italy and the U.S., others were fine art sculptors working in Italy, New York and Philadelphia. The most well-known is older cousin Mario Buatta, an internationally known celebrity interior designer.

Instead of gravitating towards sculpting, Joann was mesmerized by figurative drawings, and started painting at the age of 5 until she was able to achieve a professional level selling her paintings in college while studying at the University of Tampa.

Joann is listed in Who’s Who in American Art, a national prestigious registry which is by invitation only. Joann studied at the Barbizon School, Forest Hills, NY., New York School of Interior Design, Arts Management and concentration in painting, University of Tampa, Florida, and interned in Plant Hall Museum.

Senior Sales Associate Roger M. has been with East West Fine Art since 2013. A lifelong art lover, Roger collects art glass, sculpture, and paintings. His eclectic collection ranges from southwest, impression, surreal realism, post-impressionism, and some forms of abstract.  This passion has led Roger to work with the East West Fine Art Gallery. Roger enjoys assisting clients in finding the perfect piece of art, and meeting visitors from around the world who stop in to the gallery. 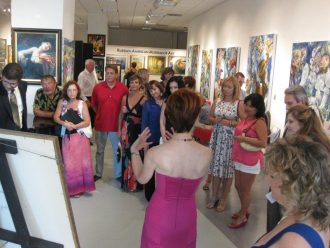 In November 2013, Gallery owners Leeza and Olga Arkhangelskaya founded RAMA: Russian American Museum of Art. Its mission is to utilize art to strengthen overall understanding between two of the world’s greatest nations, promote dialogue, and initiate and support cultural exchange. The idea for the museum came from the tremendously positive reaction from Neapolitans to Russian art and Russian themed cultural events held at East West Fine Art.

Olga and Leeza came to realization that Naples has an insatiable appetite for high quality art exhibitions and intellectually stimulating and entertaining events – all of which RAMA will provide. RAMA strives to be an integral part of the Naples cultural scene, serving the community all year round, complimenting art festivals and fairs, which have a limited time span. The museum’s pioneering structure will provide the public with unparalleled opportunities for learning about art history and the latest developments in Russian and American art. It will rest on three pillars: