Alexander Dimitrov was born in 1969, and raised in Plovdiv, the second largest city in Bulgaria. The ancient history of his native city inspires his paintings.

Plovdiv is one of the oldest cities in Europe. Archaeologists have discovered pottery and other objects of everyday life from as early as the Neolithic Age, showing that in the end of the 7th millennium B.C there already was an established settlement there.

In 342 BC, Plovdiv was conquered by the father of Alexander the Great.

In 72 BC, Plovdiv was seized by the Roman general Lucullus and was pronounced “The largest and most beautiful of all cities.”

The surviving ruins show a city with numerous public buildings, shrines, baths, and theatres, though only a small part of the ancient city has been excavated. The city had a potable water system and sewer system. It was protected from enemies with a double wall.

In the 5th century, Plovdiv became an important center of the Byzantine empire.

His “art of bronze” color evokes Levantine-Orthodox Christian/Byzantine influences, which in his art aim to depict human tragedy or its kernel and the hope for divine redemption (often symbolized by a little bird or the extended arm) in his unearthly color scheme. There is a religious element to his vision of the world as his paintings offer a window into his spectrum of inner movement of a single idea.

The very colors of royal blue and gold are the most typical and symbolize power and prosperity in ancient Byzantine. There is a presence of Madonna-like profile of a young woman or in almost every one of Alexander’s paintings. Sometime the image is multiplied to convey a coded message.

In the Christian Orthodox religion, the bird is a symbol of an eternal soul. On most of the paintings, the birds are doves, which are symbols of the Christian Holy Spirit. 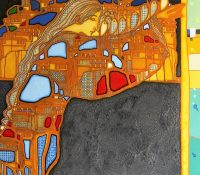 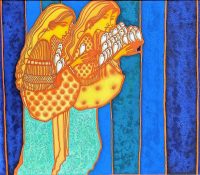 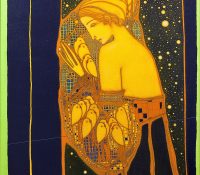 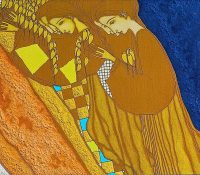 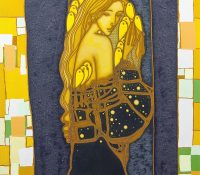 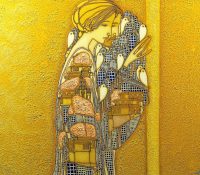 Only Love
Oil and Mixed Media on Canvas
26 x 30 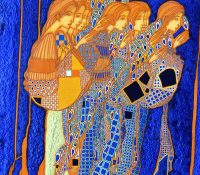 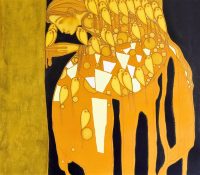 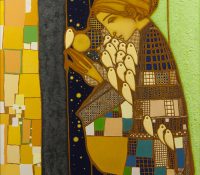 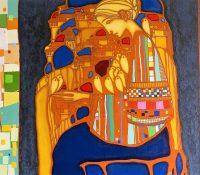 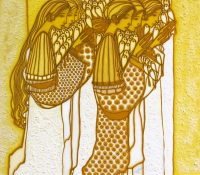 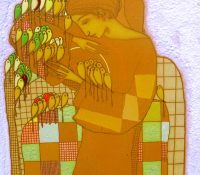 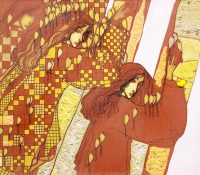