Abduction of Europa: A fresh look at a classic by Georgy Kurasov 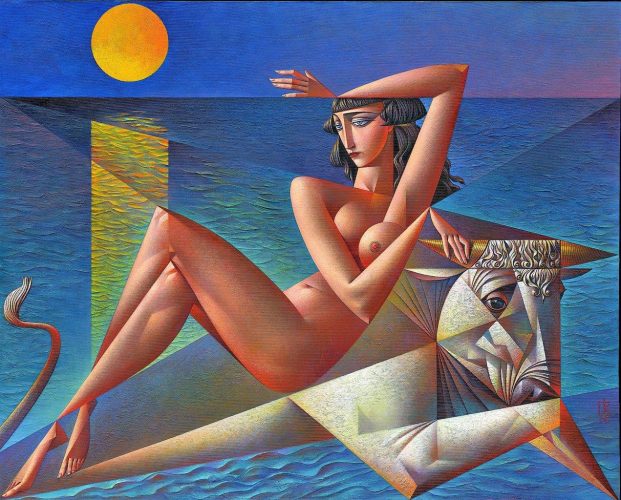 Beneath his brush and clever eye, Georgy Kurasov transfigures what we thought we knew about ancient text: by imbuing tales with modern insight, the artist more than makes mythology fresh—he allows us to see the whole story for the first time.

Kurasov has deftly chosen the moment in Europa’s story where Ovid speeds through time. At one point Ovid has her being whisked away from her homeland shores, and in the next sentence he tells us that Jupiter has secured her on Crete. Scholars have simply concluded that she fought her abductor relentlessly, that she mourned for her father, but Ovid never reports these actions or emotions.

Now, looking at Kurasov’s painting, seeing the way in which Europa is regally reposed, seeing the expression of certainty on her countenance (that of a modern woman who controls her situation, owns its every advantage), we are forced to rethink Europa’s ‘plight.’ We find in Ovid’s next chapter that her father was overbearing and brutish; for proof, look no further than his cruelty in exiling his sons for failing to return with his prized daughter.

While Europa was genuinely caught-of-guard by Jupiter’s bullish-ruse, maybe after initial panic she took stock of her situation: she would be freed of paternal tyranny, and being a clever, strong-willed and beautiful woman, she would handle Jupiter just fine, despite him being Lord over all the Gods.

The sheepish (and particularly non-taurine) look that Kurasov reveals on Jupiter’s face tells us that maybe it was Jupiter that was duped! After all, in the end he gave her a land of her own, and even named a continent for her—something unequalled by any other maiden he’d set out to overpower.

Even her white tunic, which Ovid has fluttering in the wind behind her, is absent from the painting; rather, the artist reveals the instant after she has purposefully released the garment, her hand just free of clutching it, as if she is saying, “Enough of this waving goodbye, it is time to get on with better things!”