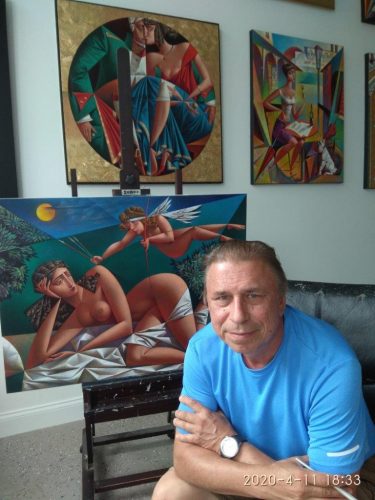 Georgy Kurasov shared with us a glimpse of his newly constructed Florida studio that also exhibits his private collection. Georgy with his muse and wife Zina reside in Clear Water, Florida during the winter months.

It is more than a spacious working art studio, it is their sanctuary. Georgy brought a large part of his private collection to his Florida studio. The new space provides room for inspiration to create what he refers to “works of amore”.

The prominent theme of his paintings and sculptures, whether referring to Greek mythology, historical romantic periods, or contemporary life, is his love for Zina.

Since the studio is attached to their home, Zina and Georgy can enjoy a cappuccino while listening to inspirational music, such as Ave Maria. The whole atmosphere of the studio is uplifting – full of tributes to love and beauty.

One of the new paintings that Georgy created is The Judgement of Paris, oil on canvas, 41 x 41.

The Judgement of Paris was a contest between the three most beautiful goddesses of Olympus–Aphrodite (Venus), Hera (Juno) and Athena (Minerva)–for the prize of a golden apple addressed “To the Fairest.”

The story began with the wedding of Peleus and Thetis which all the gods had been invited to attend except for Eris, goddess of discord. When Eris appeared at the festivities she was turned away and in her anger cast the golden apple among the assembled goddesses addressed “To the Fairest.” Three goddesses laid claim to the apple–Aphrodite, Hera and Athena. Zeus was asked to mediate and he commanded Hermes to lead the three goddesses to Paris of Troy to decide the issue.

The three goddesses appearing before the shepherd prince, each offering him gifts for favor. He chose Aphrodite, swayed by her promise to bestow upon him Helene, the most beautiful woman, for wife. The subsequent abduction of Helene led directly to the Trojan War and the fall of the city.