Shoveling dollars into the Sea? What could it mean? The symbolism behind Stanislav Plutenko’s painting. 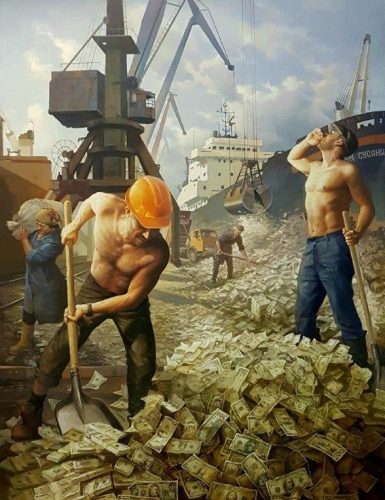 Ivan Susanin is a national Russian hero of early 17th century. According to the popular legend, Polish troops were seeking to kill Russian Tsar Mikhail. In woods near the village, they met a logger, Ivan Susanin, who promised to take them via a “shortcut” through a forest directly to the Monastery where he was apparently hiding. Susanin led them so deep into the forest that they could not find a way out and so they perished in the bitter cold.

Since that time people jokingly call Ivan Susanin someone who deliberately and seriously misleads you.

Our guesses and interpretations – they are different for everyone!!

From an economic standpoint:

The workers are loading piles of dollars onto the ship named Susanin – what could that mean? Perhaps, the world is getting rid of the mighty dollar, something that has had so much power in the world. It is the US monetary policy, US trade policy, IP policy, the powerful and protected American banking sector, its hegemonic global companies. They have all dictated to the economies and lives of people of other countries, and are often seen as oppressive powers, especially by the developing world. Has the DOLLAR, like Susanin, led our governments and economies astray? Have we been chasing the wrong model for economic development?

One of Russia’s most famous operas was -re-named “Ivan Susanin”, but in pre-Soviet times was called “Life for the Tsar”. So a question may be posed: “Are you willing to give your life for the Tsar, but not the Tsar in this case, not God even, but for the DOLLAR, for earthly sins and delights?” Where do our deepest values lie? Have we been completely seduced by consumerism, and put our material welfare above our spiritual?

Perhaps the painting is demonstrating people cleansing themselves, redeeming themselves, and living a new life with truer values, after getting rid of the consumerism that the dollar symbolizes.