The Arts – Uptown: Olga and Leeza, the art-savvy duo has a serious mission. 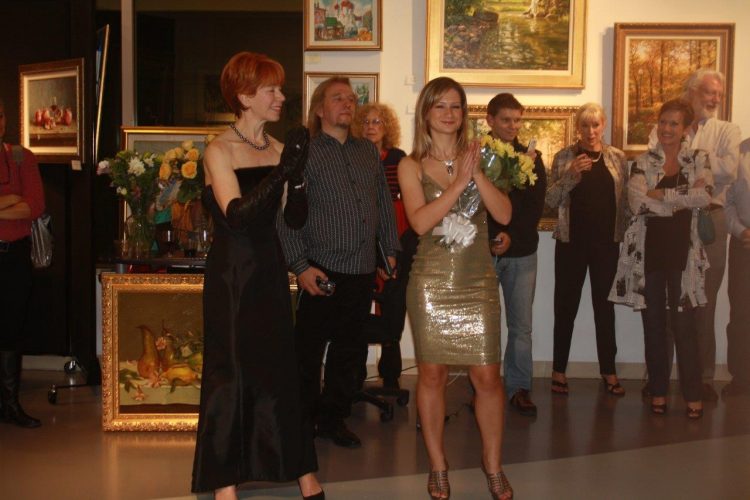 For 21 years, the engaging mother-daughter team has brought the most soulful, academic, professional, and uplifting artwork to Naples.

Before coming to Florida, and founding the only north Naples fine art gallery, the two women have had a long journey.

In 1994, fleeing the post-Soviet violence and turbulence in Moscow, Olga and Leeza arrived in Virginia with nothing but two suitcases. Shortly after, Olga’s husband and Leeza’s father, who was living in Russia most of that time, passed away suddenly. A foreigner and a young widow with a child, Olga was nonetheless determined to seize the American dream.

Olga Arkhangelskaya received Master’s Degrees in international economics at Harvard and Georgetown Universities. In Washington D.C., she then worked for the World Bank and other International Development Institutions together with global policy makers.

In 1997 Olga co-founded the Embassy’s Russian Cultural Center, and was at the forefront of brining Russian culture to the community. Her passion for art grew, and she earned an additional diploma in Fine Art History from George Washington University.

When her World Bank contract expired in 1999, Olga began a new search, not for just a career, or financial gains, or prestige, but for her life and her work to reflect her values. The mission became to share all the beauty, history, positive values in Russian art with her community.

In 2000, Olga, together with 15-year-old Leeza, set out to Naples Florida to start her own art gallery business – having no training or experience in running an art business in the U.S.

Olga’s dedication to her business and to her community was total. Working 12-hour days, seven days a week, Olga grew East West Fine Art into one of the largest and most beloved Florida galleries.

Meanwhile, after graduating from Community School of Naples, Leeza earned degrees from the University of Geneva and American University in Washington, D.C., Leeza, like her mother, worked in the area of international development for various government agencies.

Raised in Russia within a culturally rich environment Leeza with her experience in art and international business, joined the business in 2012.

Today, East West Fine Art exhibits its collection at a spacious and beautiful showroom in North Naples, in the Mercato shopping center. The gallery represents the most prominent professional artists from 15 countries around the world.